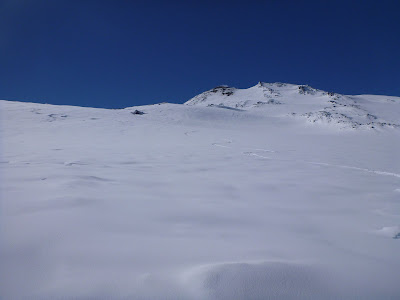 After 2 weeks of competing I was a mentally ready to go home, but I still had 4 days in chile so why waste it. My two girlfriends that were committed to traveling with me bailed, so I was not totally sure what to do. I just knew I needed to ski more, because I felt that I had spent 2 weeks in chile with very little skiing. I headed to the bus station to see if I could get on a bus to Las Trancas, which is where Termas De Chillan is an amazing little ski resort in southern chile. I caught the 2 o’clock bus and started my 6 hour journey south. I knew I only had 2 full days to ski, but I figured it would be better than hanging out in Santiago. As soon as the bus left chillan and I was the only person still on the bus I knew I had made the right decision. I got to Las Trancas  around 9 pm checked into the Chillin Hostel which is where I stayed last year and I felt right at home in my same room from the previous year. Compared to Santiago this place was so quiet barely a person around. As I arrived it was dumping rain so I hoped that meant it was dumping snow up high. 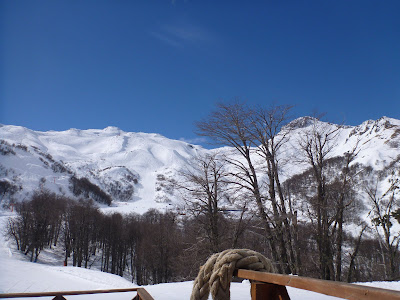 I awoke to bluebird conditions and hopefully some new snow. I had to hitch hike to the mountain, which is pretty challenging because about a car every 15 minutes goes by so it took me a little while to get to the mountain.  When I arrived I loaded the old 20 minute chair and decided to do a few runs before I skied my volcano. I should have paid more attention to the names of the runs (not sure the names), but I cut right off the chair and had first tracks down about a 2000 foot run. Yes!!! Finally I was skiing continuously. I took four of these runs and then decided to go on my trek up the volcano. I was the only one around as I toured upward, so beautiful. I started at about 8,000 feet and I topped out at 10,252 feet in about 1 hour 45 minutes. The volcano was steaming around me and I had an awesome view of the Andes in the distance. Also i was stoked about my run down. I had about 3000 feet of untracked wind blown powder that made my day. So fun!!! I skied right to my favorite bar The Igloo and enjoyed an Escudo and some good food outside on the deck. Life could not get much better! I was so happy I came, but as I sit in the airport I could not be happier to go home!!! 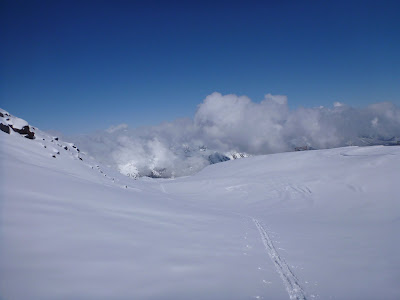