Apocalypse Couloir “Once is good” 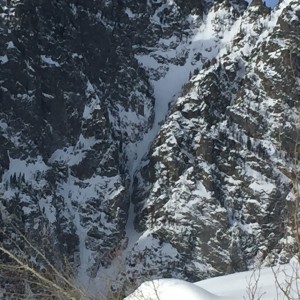 A week ago myself and my two friends Erica and Tucker decided to take a stab at skiing Apocalypse Couloir in Death Canyon. I have always wanted to ski this line, but it has always made my stomach churn. The name of the couloir alone makes you want to think twice before entering, it is dark and steep but is one of the most awesome couloirs I have skied. Having conditions line up for this couloir are tough, because once you are committed and in it, there is no bailing. Everything needs to align, stable snow, good snow in the couloir and perfect weather without wind. 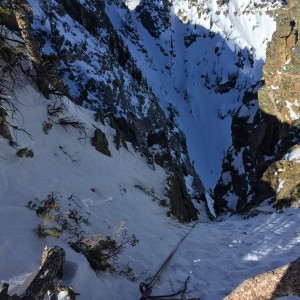 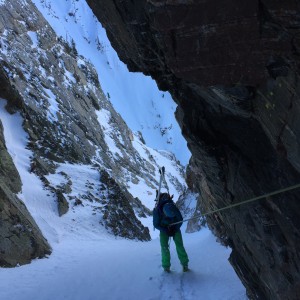 Rapping down to the cave and beginning of skiing!

In the morning when we started up Prospector it was beautiful calm clear day, it was forecasted as clear through the day. After about 4 hours of skinning we reached the entrance to the couloir, my stomach started to churn as I could not see much but just looked like shear cliffs below. I have seen a few photos and have heard  about the couloir but experiencing it first hand is totally different.
We were all silent as we got the ropes for rappel, we were a little unlucky and ended up getting 2 ropes tangled on the rappel. Tucker who went first down the rappel spent about an hour untangling them. This threw us off our schedule a bit, but the weather still seemed calm and clear so we felt good about continuing down. After the second rappel we all geared up safely in a cave looming above the couloir.

Looking down from the cave it was hard to tell where the couloir went because it was incredibly steep in the middle and then dog legged to the right further down. The snow looked nice and soft which put some of our nerves at ease. Now who was going to go first? A part of me wanted too, but was a little unsure not knowing what was below me. I ended up volunteering and as I started to ski I could not believe how nice the snow was, it was still a little tricky and I definitely did not want to fall. I skied some Scot Scmidt style turns all the way down to the dog leg, I am not sure if I have ever turned that much in my skiing life!
Between the nerves and it just being steep and long, my legs were on fire!! We all made it safely to the last rappel which was above a thick ice bulge. I was the last to rap down and we all noticed the wind had started to pick up. Slough piles had started cruising past us, they did not seem to large so we were not to worried and knew we would be out of the couloir soon. Erica got on rappel and just as she was taking herself off rappel a pile 2x as big as the last came cascading down the couloir. I could not see anything but white plume, I was worried about Erica and then I hear her yell a little ways down the couloir. She had gotten taken about 150 feet down, but was okay in the safer zone, which was so lucky.

At this point I just wanted to get out of there and I still had to rap and then ski the bottom part of the couloir. I got through the rappel and anchored myself into the ice screw, right as I did that another even larger slough pile cruised by me at about 70 miles an hour so it seemed. In the 15-20 min that I gathered the rope probably about 7 more piles flew by me. I knew I had to get out of there but to get out of the couloir I had to time the slough piles. They seemed to me about 90 sec apart, I grabbed the ice screw and skied as fast as I could about 200 ft down where Erica and Tucker were tucked off to the side. I felt like I was running the gauntlet. My adrenaline was so high and I was not going to fall no matter what. It was a pretty scary feeling that I do not need to go through again. We hustled the rest of the way out to mouth of the canyon and into safety. 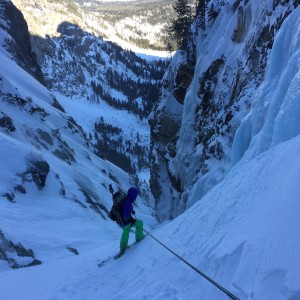 The biggest thing I learned about that day was to make sure we look far ahead into the wind forecast, the wind had come up and was gusting at around 60 mph which in turn was sending a lot of snow into the couloir which acted as a slide for the snow.  I am glad to be able to check Apocalypse off the list. I can not say I will be doing it again anytime soon. Once is good!