Skiing in the winds has always been a dream of mine since I was a little girl. Everytime we would move to the ranch on May 1, I would look up at the snow capped peaks and wonder what it would be like to ski off these amazing mountains. I have spent summers horse packing and climbing through the winds since I was 5, but have never really had the opportunity to ski in these peaks until this last week.

Myself, Kim Havell and photographer/writer Jim Harris set out on our adventure to see what we could accomplish. We gave ourselves 7 nights and 8 days to hopefully be able to ski in these not so attainable Southern Wind River Mountains. The first day our goal was to get into Sedgewick Meadows, which is right near the base of Temple Peak. Usually in the summer you can drive right to the meadows, but on a snow year like this year we parked and packed in about 2 miles via horses (thanks to my dad) and then pulled sleds and skinned the remaining 3 miles. Jim was in charge of food and I had no idea how good we were going to eat! Our sled weighed about 40lbs going into the meadow and we carried a 25lb pack. We got to our camp set up at the far side of Sedgewick Meadow. The plan was to try and ski a couloir on Temple Peak that one can see from the ranch and on the highway toward Rock Springs. The first day we awoke to snow, which was a bummer. We waited out the small spring storm and with the days being so long we were able to still get Peak 11930 (next to Temple) done leaving the camp at 12. This was around 2500 feet of skiing. From the top of this peak we were able to get a great view of the couloir on Temple that we wanted to ski the following day. 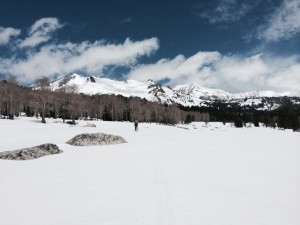 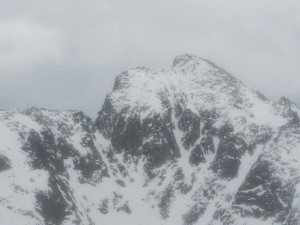 The next morning we awoke at 6 to freezing temps and started our 2 hour approach to the bottom of the couloir as we arrived at the bottom I became more excited, this was really happening. I had been looking at this couloir for years and had always wanted to stand on the summit of Temple Peak. We made our way up the couloir, there was one little narrow crux of rock in the middle that I knew would be a bit of a challenge to ski down, which made me a little nervous.

As we reached the top, the views were amazing and dropped strait down on the backside and made my stomach drop looking over the side. We skied from the summit and back to the couloir. The snow was great on the top and a little crusty through the tight crux, but overall an amazing ski! I had finally skied Temple Peak. 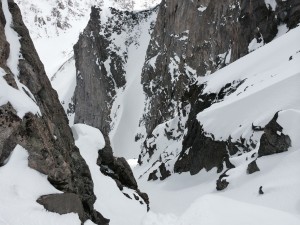 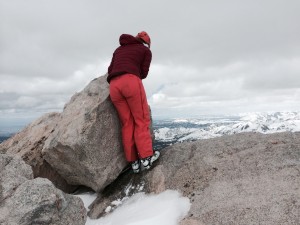 The next day we decided to try and head to Big Sandy Lake, so we could have a good base camp and access to a lot more mountains and lines. The only problem was that Big sandy lake was about 10 miles away. This involved pulling our 20-30lb sleds and carrying heavy packs through some interesting wooded and rolling terrain. I had never pulled a sled before so this was quite the learning experience for me. After 6 hours of bushwhacking and sleds tipping over I felt that I had just gotten beaten up in a wrestling match! I can not remember the last time that I had to dig that deep mentally and physically to make myself get to the lake. Once we were there it was all worth it…. Part 2 coming soon!

← Spring trip into the Southern Winds.
Skiing the Winds (Part 2) →