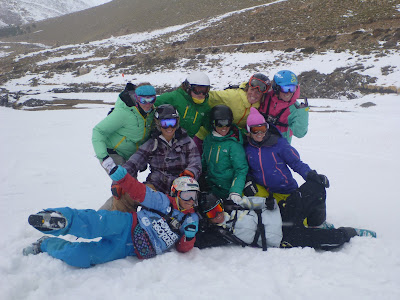 Thursday I  woke up to rain pelting the windows of the room.  The visibility was not looking good and the organizers called a weather day. Las Lenas has no trees so the visibility needs to be good to be able and compete. I was okay with them calling a weather day even though I really wanted to be able to ski and be done with the nerves. We met again Friday morning and the weather looked a little more promising but  the winds on the top were blowing 100 mph. Since the event was a Red Bull sponsored event they wanted to at least try to have a big air event and they had spent all week making a jump for the event.

They loaded us in a cat around 2 in the afternoon as the weather seemed to deteriorate, I was not sure exactly why they were trying so hard to pull off this part of the competition when we arrived at the jump it was a crazy feeling because it was just our little freeskiing family in the middle of whiteout blizzard conditions and a a big Red Bull jump. I was excited to hike up and ski some pow, but was not really feeling the jump since I could barely see 5 feet in front of me. The skiing was really fun and I watched as a few of the guys went for the big air, it was pretty cool to watch them spinning through the air in these conditions. It was getting late and they finally had to call the event. It was a bummer because the organization worked so hard to the get it off.

That is when I realized that I had won the competition, I was so stoked it has been a while since I have won, I have had a lot of seconds in the meantime so I was so happy to win especially against a strong field of women. It was a little bittersweet because I would have loved to get another run, but at the same time a first place finish is awesome. Saturday we woke up and it was one of the most

amazing bluebird powder days I have had in a while. I realize why people love Lenas, because when it turns blue there is some amazing terrain. This day would have been perfect for event, but mother nature did not cooperate. Off to Chile  for the second stop! 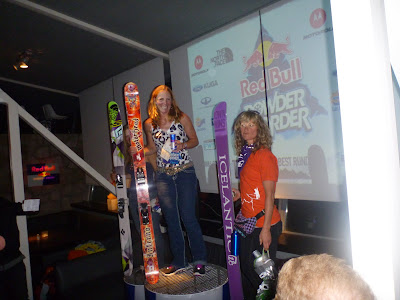