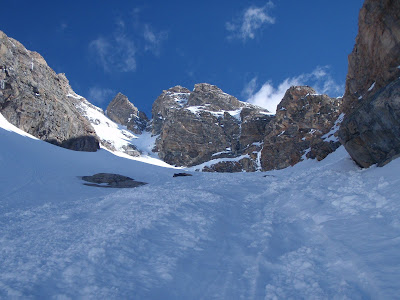 Tuesday night the conditions cleared and the temperatures dropped to freezing. My friend Brendan and I decided to head into the park and try for the Amora Vida Couloir on the South Teton. With the way the conditions have been we decided to approach from Avalanche Canyon so we could go up the route that we were going to ski. We left the trailhead at 330 with the full moon shining a lot brighter than any headlamp. As we turned off onto the Avalanche Canyon trail we started to bushwhack, this trail is not a maintained trail and after the winter the mountains had there was a ton of debris covering the trail. After about a little over an hour we were able to put our skis on and start skinning which I was grateful for after bushwhacking with my skis and boots on my back. As we skinned up toward Lake Taminah the snow was nice and hard, which made us feel hopeful. I could see the Southeast face above us and started we started to head toward the first couloir that was near the face. I had seen a few pictures of the Amora Vida, but was not totally sure if we were ascending the right couloir.
As we got closer to the Southeast face I realized that we were on the skiers left and I knew that to access the Amora Vida Couloir you skied down skiers right of the face. We Continued across and up the Southeast face the temperatures were getting warmer and the snow had not frozen completely underneath. Being above a lot of exposure we opted to turn around and ski back down the bottom of the Southeast Couloir. 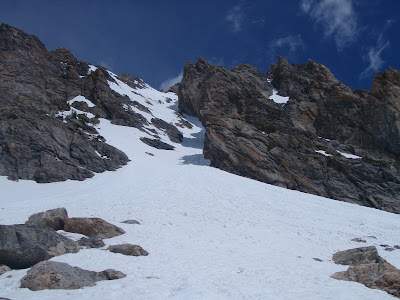 I had 4 awesome turns of perfect corn on the Southeast face and then continued to have great turns and snow into the bottom of the Southeast Couloir. I am glad we decided to ski that instead of the Amora Vida, because the snow did not look as good in the other couloir. We skied back down to the lake and then bushwhacked back to the Bradley/Taggert and were sitting on the deck of Dornans looking up at the South Teton 11 hours after we had started. (this is always my favorite part!!) I decided next on the list is the Southeast Couloir proper from the summit and approach from Garnet Canyon. It looks like a beautiful line!! 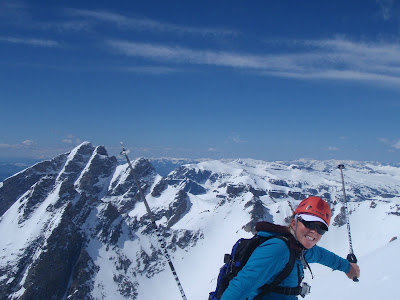