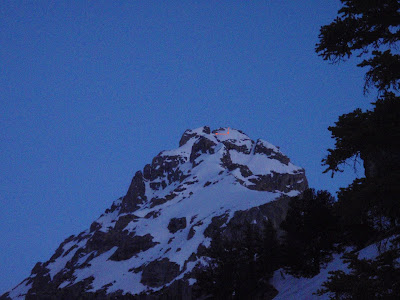 The last couple weeks have been tough conditions in the Tetons and I have had great skiing, but have gotten skunked on being able to ski the routes that I wanted to ski from the top. Yesterday that all changed when my friend Redbeard and I headed up Garnet Canyon attempting to ski The Middle Teton Glacier Route from the summit of the Middle. Heading up the snow felt pretty firm and we were more concerned about the Face not softening up. The Route has a lot of exposure right off the summit so skiing in rock hard conditions was a little intimidating. As we booted up the South West Couloir the snow was incredibly firm, so we did not know what to expect. Our route had been in the sun for about 2 hours so I was hopeful. 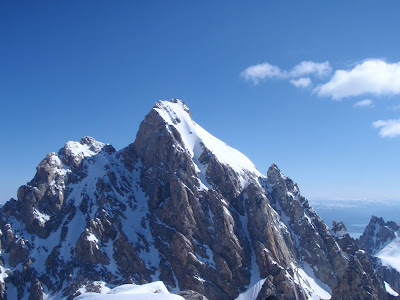 As we crested over the top the sun hit us and there was amazing views of the Grand and the South Teton. There were parties on the South and Grand summits getting ready to ski. Watching the person ski the Grand was pretty amazing from the Middle, as I looked over the East Face I got a little nervous. I could not see the exposure but knew it was there. These mountains are always so humbling to ones skiing ability, big and exposed! I clicked in, tapped the summit marker and then made my way across the narrow ramp facing the grand. Redbeard entered in first and made two beautiful corn turns above the large exposed face. As I dropped in I had two great turns and then cut right towards the south. The exposure was not over we had to cut across a ramp and then there was a quick side step drop-in above the Middle glacier. We continued to have amazingly steep corn turns the entire way down to the meadows. I was so excited that I had finally skied the route, it was so exhilarating! The route was definitely one of the cooler routes I have ever skied in the Tetons and the ski was well worth the hike.