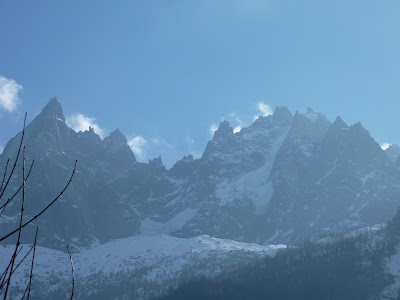 We arrived in Chamonix yesterday morning to very little snow, but sunny skies. With the mountains and the valley of Chamonix it is still one of the most gorgeous places I have ever been. We skied Brevent for 4 hours enjoyed the views, some beers and the springtime sunshine. Last year this is where I competed for the Freeride World Tour and the venue that we competed on was not even skiable! 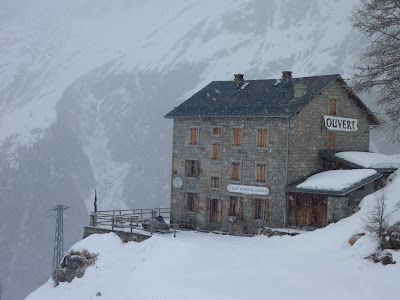 The face I skied down was a sheer rock face, which is pretty crazy to think about even skiing that with snow. We caught up on our sleep and then today decided to do some ice climbing. I have gone ice climbing twice in my life so I was a little nervous, also being in Chamonix where everything is so big made me a little more intimidated. Brian loves to climb though and has done quite a bit, so I felt I was in good hands. I wore my new Dynafit boots for the first time not to ski but to ice climb. They worked well except my feet were absolutely killing me and my crampons were sliding around a bit. I definitely used my arms more!! We took the first leg of the Grand Montet Tram and then hiked to the ice. Brian and I rappelled down the ice we were going to climb and then climbed two pitches, I was nervous the entire time, but thanks to my amazing boyfriend I remained calm and climbed fine!! (ha ha) After that we enjoyed a beer at the Chalet Refuge De Lognan a small hut overlooking the bottom of the Argentiere Glacier. We then took the tram down and caught the bus back to our cute little hotel in the heart of Chamonix. Great first day, tomorrow hopefully some skiing in Courmayeur, Italy. This is only about 30 minutes away, so crazy how close the countries are. 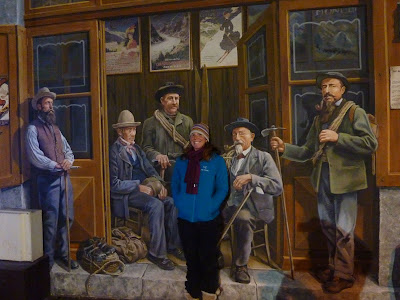 Chamonix from Brian Mulvihill on Vimeo.

← Freeskiing Comp, No Name, Gothic, Once and Twice!!
Chamonix →