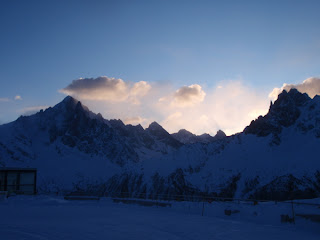 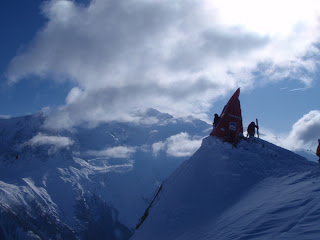 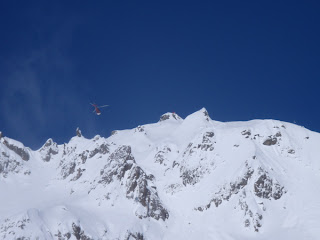 The face that we were given to compete on received about two feet of snow the day before our competition. Normally this would be an amazing thing to have happen before a competition. The only problem was that the half of the venue was south facing which made for icy conditions under the snow. I woke up very nervous for my first Freeride World Tour event. It was a little different scene then the Freeskiing World Tour and I was definitely the rookie, a woman and an American. I watched the first 13 guys go and they were being sluffed all over the venue because of the steepness and the snows ability to bond to the icy under layer. I watched the whole face that I was going to ski slide away to the icy layer underneath. I also watched some of the best guy skiers in the world crashing on small airs. It was definitely hard for me to keep to my game plan about skiing the south side, but I wanted to ski the steep face and I had been looking at it for five days! The other side was bottomless powder, but I could not seem to find anything that really interested me. Jess found something she liked over there and at the last minute changed her line to that area (a good cliff as well.) and had a blast and in the end it payed off for her because she won the comp! (which is so awesome totally happy for her.)

I headed up to the start, which was a very steep boot pack with the most amazing views in the world. I left the starting gate so excited to ski one of the more cooler lines I have skied in competition. I came on the the 50 degree face and sure enough it sluffed on me a little at the top of the face as I was standing on very icy snow. I was able to hold onto myself as heavy snow tried to knock me off my feet. (would not have been a good place to fall, so exposed.) I skied into my first air off the ramp with good direction as my skis left the ground. I landed very hard in the debris that had setup throughout the day. I accelerated into the soft snow and it was like hitting a cement wall, I tumbled got up and continued to ski. As I entered into my bottom air once again the snow broke lose as I took off and I landed flat and sat down for a moment as my snow fell on top of me and then skied out. Overall not a great showing, but was excited about my line and glad I did not ski something easy. I just could not believe how much snow I played in on my way down! Pretty bummed, but not a lot I can do I am in Chamonix and had an amazing experience. Hopefully better luck in Austria.
Posted in: Uncategorized