Attempt of Southwest Couloir on Moran! 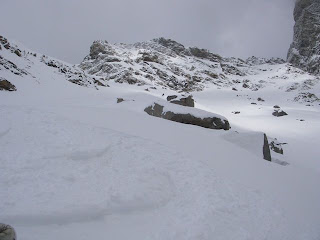 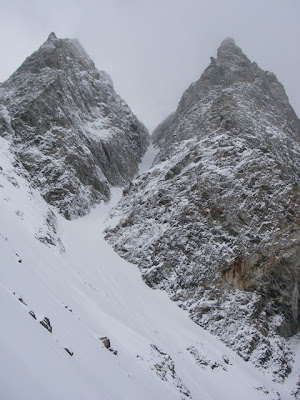 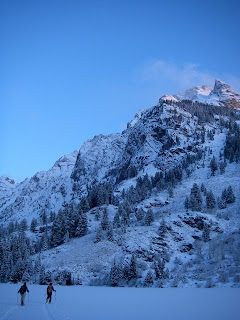 It had snowed about three feet in the last week, which was making for some winter conditions. A group of four of us decided to go and checkout and hopefully ski the Southwest Couloir on Mt Moran. I was not feeling totally optimistic, because of all the snow that we had received in the past week, but I was really excited to go and check out a new area. We left the String Lake parking lot at 5 am, the skies were clear and it was below freezing. We skinned across Leigh lake, which was still very frozen. The sun rose up over the lake and made fore a gorgeous sunrise. We stopped for water and food at the mouth of Leigh canyon on the far side of the lake. We then started to ascend up the canyon, the skinning was pretty tough with all the new snow we were trudging in snow up to our knees. I was glad that we had four of us to break trail, because we continually switched off as we climbed about 3800 vertical feet. Somehow we missed our turn and ended up at the bottom of Hidden Couloir on Thor Peak. Dan and Mark were sure we were going the right way and Brian and I were not totally convince, we somehow had veered away from Moran. We decided since we had already come this far that we would just start making our way up Hidden Couloir and get some good turns. We were skinning up the bottom when a small slide came barreling down above us, which seemed to be in slow motion. We were all able to get out of the way, but that was enough excitement to turn us around. We skied back down the skin track and decided to at least see if we could see the Southwest Couloir. We boot packed up a protected saddle and there right in front of us was the couloir, it looked pretty awesome. We knew with the conditions and time of day that we were not going to attempt to ski it. We skied over the saddled and decided to ski down the gully that we were supposed to ascend up. The skiing was really good, with just a few sharks here and there. Since we had not come up this way we were not sure if we could ski the entire way down. The gully narrowed more as the four of us descended in elevation and we all skied to the side in a safer zone and Brian skied down to see if the we could ski through. He said it was a no go, we then strapped on our crampons and got out our ice axes and decided to try and down climb the small ice section. Mark descended first and was having some difficulties so we started to look for another route. We climbed up and to the right and were relieved to find a way out. We skied out and to the lake and were psyched to have made it safely down. After seeing the couloir I can not wait to get back up there to hopefully ski have another chance to ski the Southwest Couloir!!!